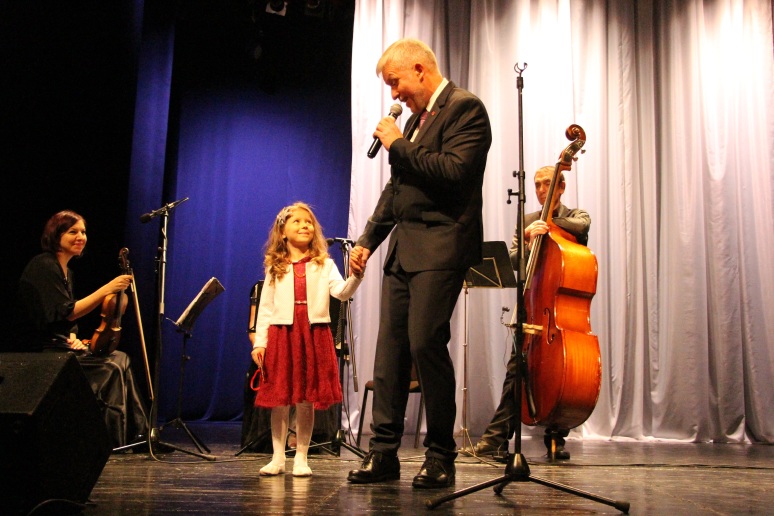 On December 14th, at 6 pm, Pasvalys Municipality Mayor Gintautas Geguzinskas charity evening-concert was held at Pasvalys Culture Center, which was dedicated to the NGO "Save the Children" Pasvalys Division.
The Municipality Mayor's charity Evening-concert gathered a large group of people, who wanted to help our district's children. Laimute Ceslauskaite, a soloist of Panevezys Musical Theater and “Trio Musicale” chamber ensemble, performed in the charity evening-concert and people were enchanted by the wonderful music sounds.
Gintautas Geguzinskas sincerely thanked those who gathered, for their generosity and this expression of goodness - participation in the charity evening-concert. This charity event happens every year for 15 years, and he was grateful to the people, who come, for their big hearts and support.
Rasa Dicpetriene, General Director of “Save the Children” in Lithuania, was happy with the generosity and willingness of our people. Gintautas Geguzinskas received a Thank You certificate from her, for aiding the children of the District.
Evening host Viktoras Stanislovaitis talked about the families and children who were helped by the "Save the Children" Pasvalys Division. One of these stories was about a family living in Daujenai eldership. The family lives very poorly, barely makes ends meet, and more, recently, homeowners of their rented house have said that the family will have to buy the rented house or get out before the holidays. The family has no savings, so the fate was clear. Kestutis Mitras, Head of Pasvalys Rotary Club, was pleased to announce that the Rotary Club will help the family buy giving the money needed to buy the house. He was happy that the club could help and wished everyone beautiful and warm holidays. Continuing the stories of people, which are in need of goodness, the host of the event also spoke about a family the organization helped. When the mother died, there were 5 children left in the family. After the death of his wife, the father broke down and began to drink. The middle sister with her two older brothers took care of the whole family farm and two three-year-old twins – a sister and a brother. The girl said it was very difficult. The situation has changed when this organization appeared in their lives. The girl is currently studying in Siauliai, but together with the older brothers, she continues to care for the remaining children at home. She assured people that the children are not responsible for their parents' chosen paths and mistakes, and often are in need for help.
Grazina Sakalauskiene, Head of "Save the Children" Pasvalys Division, also welcomed the participants of the evening and shared the daily joy and worries of the day-care center in Pasvalys. She emphasized that many children, not necessarily from poor families, sometimes need help, love and support. Therefore, this center, along with all the activities of the division, are very important in the life of the little ones.
A few years ago, the same charity evening was held to help a sick girl, Viktorija Tamulionyte. This year's event was complemented by this joyful girl's participation. She, after healing, grew up and filled the evening with joy, invited the gathered to help the children of Pasvalys and give a piece of their hearts. The girl was the center of the evening, demonstrating that the goodness of the charity is meaningful and really helps people. Together with the event host, she was leading the evening, presented the art works in the auction, and even sold her own book "Everything Will Be Good" for parents and children who are fighting cancer.
At the end of the concert, a small auction took place at the Pasvalys Cultural Center, where gathered money was also given to the organization. Ceramics, paintings, Advent wreaths, knitted socks, crocheted children's toys, board games and sledges, Viktorias’ book and a copy of the resolution of the Council of Lithuania on the Restoration of Lithuanian Independence gained considerable popularity.
At the end of the charity evening, a total of 6 769 euros was donated to NGO “Save the Children” Pasvalys division, by summing up the tickets sold, the envelopes of goodness and the money collected during the auction.
Gintautas Geguzinskas sincerely thanked all the people who have contributed with their donations. Special thanks to employees of Pasvalys Culture Center, event host Viktoras Stanislovaitis, CEO of MB “Salia Parko” Ingrida Jatuziene, owner of flower shop “Ziedu dulkese” Vilma Zvinyte, owner of sewing equipment shop Aukse Ajauskiene and Municipality Administration employees who contributed to the implementation of this evening. For paintings - Balis Tuskenas and Monika Eidukaite-Palaimiene, for Advent wreaths to Pasvalys Interact Club members, for bracelets made for the guests of the evening to Zadeikonys multifunctional center, for the copy of the resolution of the Council of Lithuania on the Restoration of Lithuanian Independence to Egidijus Zapustas and for the wonderful socks to Regina - we sincerely thank you for donating to the auction. We thank Alfred Zigmantas, General Manager of UAB “Stigma”, for donating the table football and ice hockey games and sleds.
Your kindness will warm up the hearts of many of our district children and raise their spirit as the year's great holidays approach. Let this kindness come back to your home and reward you and your loved ones.